Back in 1995, an international trade dispute between the U.S. and Japan helped drive a 25 percent plunge in the dollar versus the yen.

Now, with Hillary Clinton and Donald Trump heading into the November presidential election pledging to reshape U.S. trade policy, some of the world’s biggest currency traders are warning of a repeat performance. 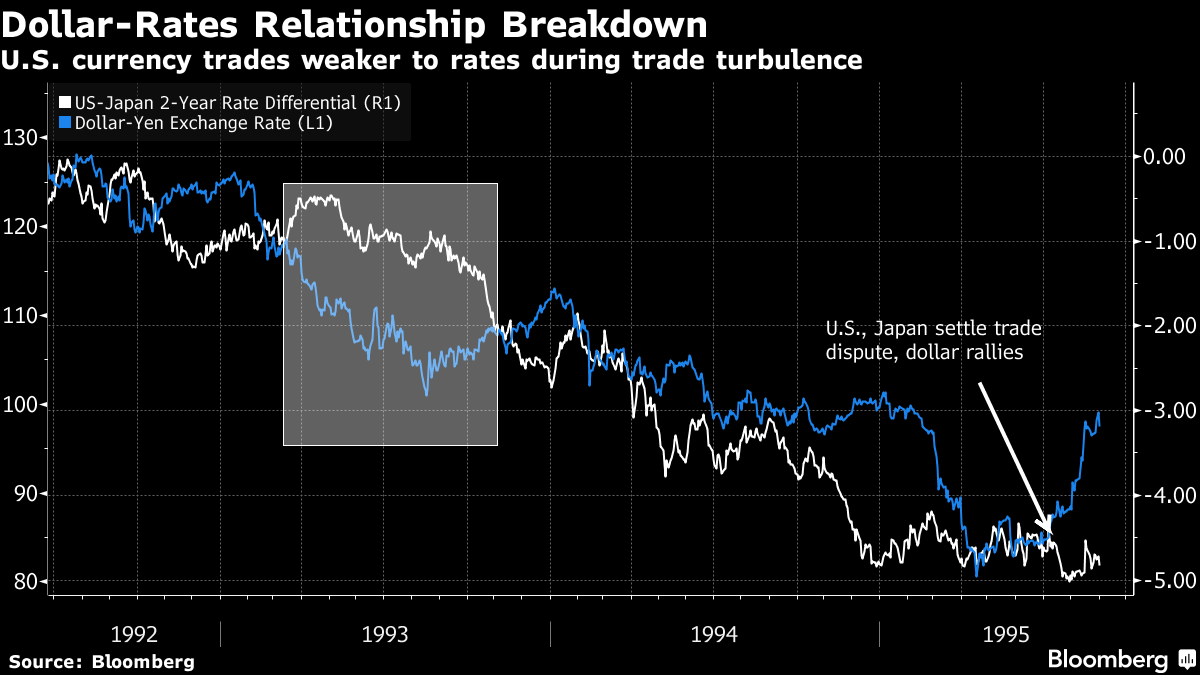 JPMorgan Chase & Co., the world’s second-largest foreign-exchange trader, says regardless of who wins in five months, rising tension between America and its biggest trade partners may send investors flocking to currencies including the euro and yen. Strategists from Deutsche Bank AG, HSBC Holdings Plc and Credit Suisse Group AG also see those peers as beneficiaries if trade tensions and political uncertainty were to weaken the dollar, which has historically traded at as much as a 20 percent discount during export-import fights.

If “trade issues become a more negative force for risk and a major additional source of uncertainty, this is the biggest concern that the currency market will have regarding the run up to the election,” said Alan Ruskin, global co-head of foreign-exchange research in New York at Deutsche Bank, the world’s fourth-largest currency trader. “The yen would be the obvious beneficiary. The euro and euro proxies like the Swiss franc would be the other currencies that would do better.”

The Bloomberg Dollar Spot Index, which tracks the currency against 10 major peers, rallied 20 percent from mid-2014 through 2015 as Federal Reserve policy makers moved toward an interest-rate increase while counterparts in Europe and Japan added to monetary stimulus. This year, the U.S. currency has retreated 5 percent as a sluggish domestic economy and global headwinds sideline Fed plans for additional tightening.

Greenback weakness this year contrasts with forecasts for gains versus the euro and yen, according to Bloomberg surveys of analysts. History shows currency markets are often an early bellwether for investor concern surrounding political risks.

In the 1995 dispute, the U.S. proposed tariffs of as much as 100 percent on Japanese-made luxury cars, helping send the dollar down against the yen. The greenback traded about 20 percent below fair value, compared with U.S.-Japan two-year interest rate spreads, according to JPMorgan.

The dollar also weakened when then-presidential candidate George W. Bush promised voters in Ohio and West Virginia in 2000 that he would aid the steel industry, with the U.S. subsequently imposing tariffs on EU imports. Europe brought the U.S. before the World Trade Organization, which ruled against America in July 2003. The U.S. repealed its tariffs by the end of the year, but not before the dollar weakened about 30 percent against the euro between Bush’s inauguration and the end of the dispute. 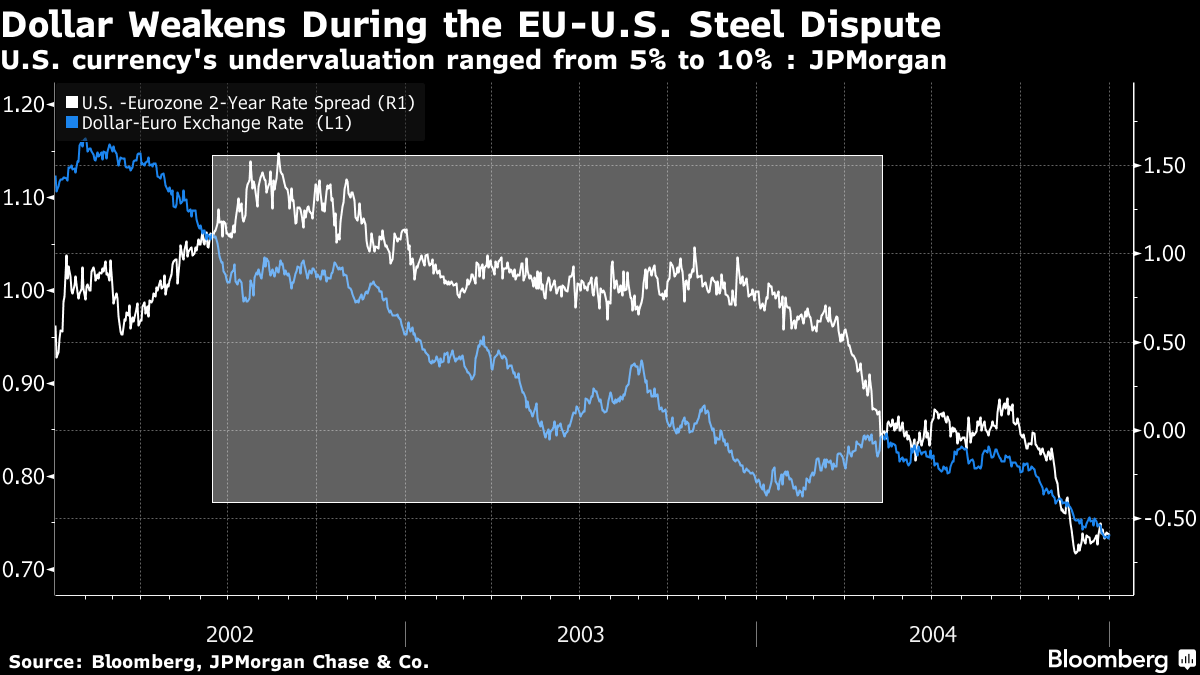 Trump, the presumptive Republican nominee, has proposed to label China a currency manipulator, impose countervailing duties on Chinese exports and set a 35 percent tariff on imports into the U.S. from American companies that have outsourced production to Mexico.

Clinton, the presumptive Democratic nominee, has pledged to establish a chief trade prosecutor reporting to the President, triple the number of trade enforcement officers, address Chinese abuses and crack down on currency manipulation that hurts American workers.

Hedge funds and money managers cut net-bullish bets on the dollar last week to 88,105 contracts, according to data from the Commodity Futures Trading Commission. That follows five weeks in April and May when bearish wagers outnumbered long positions.

Options indicate comparatively less election-related currency risk. Six-month euro-dollar implied volatility, which includes the Nov. 8 U.S. election date, was 9.6 percent, below its average of 10.1 percent this year. For the yen-dollar, the gauge of anticipated price swings stood at 11.7 percent, compared with a 2016 average of 10.7 percent.

“You wouldn’t say that it was inevitable,” said Steven Englander, New York-based global head of Group-of-10 currency strategy at Citigroup Inc., the world’s biggest currency trader. “It’s not guaranteed that’s going to be the issue, and it’s not clear that, if that is the issue, it’s going to play out the way it played out in the ’80s and ’90s.”

Other measures of country risk have picked up, with U.S. sovereign credit default swaps climbing to about the highest since March 2014. Historic volatility on Bloomberg’s gauge of the greenback reached the highest in almost a year earlier this month.

When you have a potential president coming in who is anti-trade or perceived as anti-trade, assets would require a higher risk premium, and that leads to foreigners selling those assets, said Shahab Jalinoos, global head of foreign-exchange strategy in New York at Credit Suisse. “Arguably, the dollar will go lower,’’ he said.