Wall Street’s Brexit headache just got a dose of relief. Will it last?

The Dow soared as many as 271 points on Monday before closing with a gain of 130 points. The advance was fueled by a series of opinion polls that suggest the campaign pushing for the U.K. to leave the European Union may have lost momentum.

That’s good news for U.S. stocks, because investors fear Brexit will cause financial and economic turbulence that will ripple across the Atlantic. Global stocks slumped last week after polls showed a spike in support for leaving the U.K.

Thursday’s Brexit vote is still too close to call, and notoriously-unreliable U.K. polls may continue to be volatile. That could help explain why the big rally on Wall Street faded a bit by the closing bell.

“We expect remain to take it, but plenty of price action and popular opinion noise between now and Thursday,” Bespoke Investment Group wrote in a note.

In other words, stay tuned.

On Monday, the Dow had its best day in nearly a month, while the Nasdaq jumped 0.8%. European markets, which have far greater exposure to the Brexit risk, are partying even harder. The U.K.’s FTSE 100 closed up 3% and the British pound is spiked 2.2% against the U.S. dollar — the currency’s best day since late 2009. 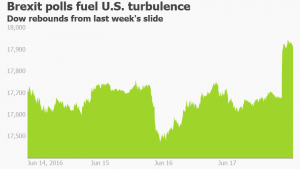 Here’s another sign that Brexit worries are fading: CNNMoney’s Fear & Greed Index is back in “greed” mode. The gauge of market sentiment briefly flashed “fear” last week on the Brexit polling.

Some may be surprised to see a referendum in the U.K. moving markets in the U.S. But Brexit is a big deal. The U.K. government, which is campaigning in favor of staying in the EU, has warned Brexit would kill jobs, plunge the country into a recession and create currency turbulence.

Independent forecasters believe a vote to leave the EU would crash U.K. stocks and send the S&P 500 slumping 5%. Brexit would also raise serious long-term concerns about whether other countries will try to follow the U.K. out of the EU, calling into question the entire integration experiment.

“Many think that a U.K. vote to leave could precipitate a broader crisis in the EU, and especially” the eurozone, strategists at Brown Brothers Harriman wrote in a note.

Others think investors are overestimating the negative repercussions of Brexit.

“A vote by the UK to leave Europe would not lead to instant fire and brimstone and selling everything willy nilly is not justified,” Michael Block, chief strategist at Rhino Trading Partners, wrote in a note.