The Public Accounts Committee (PAC) said the £130m (~ $181) settlement “seems disproportionately small”, compared with the size of its UK business.

The Labor Department numbers underlined the strength of the US economy and may allow the Federal Reserve to gradually raise interest rates this year.

Another 30,000 jobs were also added to the previous estimates for December and January.

The unemployment rate was unchanged from January at 4.9% – an eight-year low.

Luke Bartholomew, investment manager at Aberdeen Asset Management, said: “This should scotch suggestions that the US is about to tip into recession. It’s yet more evidence that the labour market is in good shape, although wage growth was more disappointing.”

The year-on-year growth in average hourly earnings slowed to 2.2% last month from 2.5% in January.

Last week, official figures indicated that the US economy expanded at an annualised pace of 1% in the quarter, compared with an initial estimate of 0.7%.

The strong jobs market and improved growth outlook, together with signs that inflation is creeping up, could prompt the Fed to raise rates in the summer.

It did so in December for the first time in nearly a decade – a decision that had been criticised by some for holding back the economic recovery.

However, Chris Williamson, chief economist at Markit, questioned whether the Fed would act anytime soon.

“Current signs of rising inflationary pressures and a tightening labour market need to be viewed alongside indications that the pace of economic growth may be slowing, and possibly sharply, amid growing concerns about the outlook,” he said.

“The big question will be the extent to which the Fed heeds the warning lights flashing in the background.”

However, mining lost a further 18,000 jobs after shedding 9,000 positions the previous month, and the manufacturing sector shed 16,000 jobs, reversing some of January’s surprise increase. 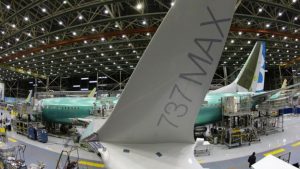 Meanwhile, the US trade deficit rose in January as exports fell for a fourth consecutive month.

The Commerce Department said the gap between exports and imports climbed to $45.7bn in January from a revised $44.7bn in December.

Exports of goods and services fell 2.1% in January to $176.5bn – the lowest since June 2011. US exporters have been hurt by a global economic slowdown and by a strong dollar that makes US products more expensive overseas.