PENSIONS MAY BE CUT TO ‘VIRTUALLY NOTHING’ FOR 407,000 PEOPLE

PENSIONS MAY BE CUT TO ‘VIRTUALLY NOTHING’ FOR 407,000 PEOPLE

One of the biggest private pension funds in the country is almost out of money, and fresh out of options.

The Central States Pension Fund has no new plan to avoid insolvency, fund director Thomas Nyhan said this week. Without government funding, the fund will run out of money in 10 years, he said. 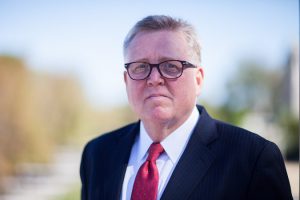 Thomas Nyhan, the executive director of the Central States fund

At that time, pension benefits for about 407,000 people could be reduced to “virtually nothing,” he told workers and retirees in a letter sent Friday.

In a last-ditch effort, the Central States Pension Plan sought government approval to partially reduce the pensions of 115,000 retirees and the future benefits for 155,000 current workers. The proposed cuts were steep, as much as 60% for some, but it wasn’t enough. Earlier this month, the Treasury Department rejected the plan because it found that it would not actually head off insolvency.

The fund could submit a new plan, but decided this week that there’s no other way to successfully save the fund and comply with the law. The cuts needed would be too severe.

Normally, when a multi-employer fund like Central States runs out of money, a government insurance fund called the Pension Benefit Guaranty Corporation (PBGC) kicks in so that retirees still receive some kind of benefit.

But that’s not a great solution in this case. For one thing, the amount is smaller than what pensioners would have received under the Central States reduction plan, and is based on the number of years a retiree worked. A retiree would receive a maximum $35.75 a month for each year worked, according to the fund’s website. (That amounts to $1,072.50 a month for retiree who worked 30 years.)

But there’s yet another problem. The PBGC itself is underfunded and isn’t expected to be able to cover all the retirees in the Central States Pension Fund.

“The fact that the … PBGC is also running out of money means our participants may see their pension benefits ultimately reduced to virtually nothing when the fund runs out of money,” Nyhan said in his letter.

Only government funding, either to the Central States Fund directly or through the PBGC, can fix the problem, he said. 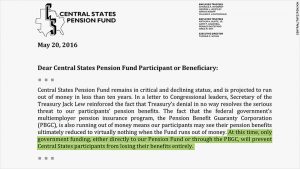 The Central States Pension Fund covers workers and retirees from more than 1,500 companies across a range of industries, but most of its retirees were truck drivers.

A lot of the fund’s companies went bankrupt after the trucking industry was deregulated in the 1980s. That’s part of the reason the fund is in trouble now. It’s currently paying out $3 for every $1 it takes in.

Although the Treasury Department rejected the proposed cuts, Secretary Jack Lew acknowledged that its decision does not resolve the problem. He urged Congress to address the remaining issues.

Nyhan is also asking Congress to come up with a solution. But right now there’s only one piece of legislation on the table that could help, he said.

The bill was introduced by Senator Bernie Sanders last year, but never moved out of committee. It’s called the Keep Our Pension Promises Act (KOPPA) and would provide more funding for the PBGC, specifically for struggling multi-employer plans. It would be paid for by closing a loophole in the estate tax and a tax break on sales of expensive art and other collectibles, according to Sanders’ website.