THE SWISS ARE DISCUSSING PAYING PEOPLE $2,500 A MONTH FOR DOING NOTHING.

The country will vote June 5 on whether the government should introduce an unconditional basic income to replace various welfare benefits. Although the initiators of the plan haven’t stipulated how large the payout should be, they’ve suggested the sum of 2,500 francs ($2,500) for an adult and a quarter of that for a child.

It sounds good, but — two things. It would barely get you over the poverty line, typically defined as 60 percent of the national median disposable income, in what’s one of the world’s most expensive countries. More importantly, it’s probably not going to happen anyway.

Plebiscites are a common part of Switzerland’s direct democracy, with multiple votes every year. The basic income initiative is taking place after the proposal gathered the required 100,000 signatures, though current polls suggest it won’t get any further. The idea of paying everyone a stipend has also piqued interest in other countries, such as Canada, the Netherlands and Finland, where an initial study began last year.

The initiators say the sum they’ve mentioned would allow for a “decent existence.” Still, on an annual basis, it would provide only 30,000 francs — just above the 2014 poverty line of 29,501 francs.

About one in eight people in Switzerland were below the level in that year, according to the statistics office. That’s more than in France, Denmark and Norway. Among those over 65, one in five were at risk of being poor.

“It’s not like you see abject poverty in Switzerland,” said Andreas Ladner, professor of political science at the University of Lausanne. “But there are a few people who don’t have enough money, and there are some people who work and don’t earn enough.”

“A rich country like Switzerland has the great opportunity to try out this great experiment,” he said.

The initiative doesn’t lay out the conditions under which non-citizens would qualify.

The proposal is opposed by the government, which says the stipend would mean higher taxes, create disincentives to work and cause a skills shortage. The economy is already hamstrung by the franc’s strength, with businesses warning they’ll move production to less pricey locations to reduce costs.

“We’ve come to the conclusion that such an initiative could weaken our economy,” said Interior Minister Alain Berset.

That view has struck a chord with the electorate: Polls show some 60 percent also oppose it. 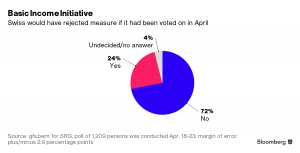 –With assistance from Raine Tiessalo, Greg Quinn and Corina Ruhe.