ARE YOU PREPARED FOR NEW OBAMACARE TAX FORMS?

ARE YOU PREPARED FOR NEW OBAMACARE TAX FORMS?

For tax year 2015, millions of Americans will be getting a new tax form related to health care reform measures.

Will you know what to do with yours when it arrives?

The Affordable Health Care Act, colloquially known as “Obamacare,” mandated three new tax forms to be used as a kind of proof of insurance so taxpayers may avoid paying a penalty for failure to be covered. They are:

While Form 1095-A debuted last year after Americans began purchasing insurance on exchanges and qualifying to related tax credits, tax year 2015 will be the first time the B and C version are mailed out to insured employees.

But if you’re intimidated by the prospect of more paperwork, don’t be. In fact, you don’t even have to wait for the tax form to arrive in the mail if you know you were covered for all of 2015, said Debra Hammer, spokeswoman for tax preparation giant Intuit TurboTax.

“Go ahead and file your taxes before the form arrives. And when you do get a form, just review it for accuracy,” Hammer said.

Of course, things are trickier if you do not have health insurance, or if you were only covered for part of tax year 2015.

The purpose of the forms, after all, is to prove you have insurance and, therefore, avoid paying a penalty that is sometimes referred to as the “individual mandate.” 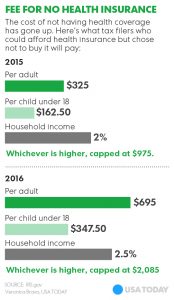 If you weren’t insured for every month in tax year 2015, it’s worth exploring any exemptions you might have before paying any related penalties. In fact, the Internal Revenue Service said about 300,000 people paid a penalty last year but likely qualified for some kind of exemption. If you are facing a fine, visit healthcare.gov/exemptions-tool to see if there’s a way to reduce or eliminate that penalty.

All in all, Hammer of TurboTax said that the new Affordable Act Tax forms are straightforward and that taxpayers shouldn’t panic.

“Given that people don’t have to wait until they have the B’s and C’s to file their taxes, it shouldn’t be a difficult year,” she said. And given that Form 1095-A is now a year old and the exchanges have been running for some time, both preparers and the IRS itself should easily be able to process filings without a hitch this year.

BUT ARE BUSINESSES PREPARED?

However, while individuals may have an easy go of it, small businesses may find compliance with the new tax rules a bit troublesome on their end, said Vic Saliterman, senior vice president of health care reform at payroll service provider ADP.

Some employers with 50 or more full-time workers may be subject to “shared responsibility” fines if they don’t offer employees insurance — or if their plans are too costly or don’t offer a minimum amount of coverage. That means they have to keep accurate records and report their insurance plans to the IRS or else suffer big fines of their own.

“The 1095 form is really the mechanism that the IRS is going to use to assess whether or not each person has the required coverage, and it’s what the individual is going to use to demonstrate that they’ve got the coverage,” Saliterman said. “Then the IRS will marry the two up.”

In other words, if you’re a small-business owner and miss some forms, discrepancies may raise flags or result in fines with the IRS.

Saliterman said that the study shows that the smaller the company, the more at risk it is.

“They are so focused on running their business, they just don’t have the additional resources to focus on things of this nature,” he said.

And, unfortunately, Saliterman added, small businesses may have their hands full for some time because “it’s unlikely we’ve seen the final chapter” in tax changes related to the Affordable Care Act. He pointed to debates over the so-called “Cadillac tax” on premium insurance plans as just one sticking point employers will have to watch.

“With something as broad and complex as the ACA and with so many political interests, things will remain very fluid,” Saliterman said.

Contributing: Jeff Reeves is the editor of InvestorPlace.com and the author of The Frugal Investor’s Guide to Finding Great Stocks.