AN ACADEMIC economist was taken off a plane last week after a fellow passenger became suspicious. He was feverishly scribbling what she thought was “terrorist code” or foreign lettering into a notebook. It turned out that Guido Menzio, an Italian economist from the the University of Pennsylvania, was working on some differential equations for a model on menu costs and price dispersion. Thankfully, Mr Menzio was allowed back on his flight. But passengers can’t be too careful. Here are ten ways to tell you might be sitting next to an economist; police have also released pictures of two prime suspects (see below). 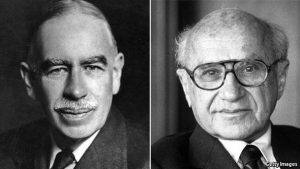 1. He refuses to listen to the safety announcement because “in the long run, we’re all dead”

2. He keeps telling you that “there is no such thing” as a “complimentary refreshment service”

3. He avoids prolonged conversation with you because he has a “rational expectation” that you’re an idiot since you chose the middle seat

4. But he offers to trade his aisle seat for yours in a competitive auction with the woman sitting behind you

5. He plonks his elbow on the arm rest because space has a “higher marginal utility” for him than for you

6. When he elbows you in the ribs, he says he is simply trying to “nudge” you into better behaviour

7. When he opens the overhead locker, a copy of Thomas Piketty’s “Capital in the 21st century” falls out and hits you on the head

8. But then he uses the book as a footrest

9. He only relaxes when the plane reaches 35,000 feet because then it’s in “general equilibrium”

10. Spends all the flight scribbling Greek letters into a notebook. Turns out it’s not a series of equations; he’s part of the IMF negotiating team en route to Athens.

11. Adds an extra point to a “top 10 list” because he believes in “quantitative reasoning”