America’s middle class is deeply concerned about jobs, pay and their future, and many of them are blaming China.

In the U.S., 43% of voters believe trade with other countries is a bad thing, according to the Pew Research Center. It’s not that hard to understand why.

But the middle class in the U.S. and across the developed world has stagnated: incomes rose a mere 4% over that 20-year same period, according to economist Branko Milanovic. He studies pay and wealth around the world and just published a new book, “Global Inequality.”

To be clear, a Chinese middle class family still earns around $8,000 a year, a lot less than the typical U.S. household income of about $54,000, according to the World Bank. But the Chinese are getting richer at a much faster rate.

Consulting firm McKinsey predicts that by 2022, the majority of China’s urban middle class will earn $9,000 to $34,000 a year. They are embracing all the trappings of a better life: eating out more, vacationing around the world and buying new cars.

Compare that to the U.S. where even people who have jobs worry they are one step away from financial ruin. Expenses are going up, but a typical family earns about the same amount of money now as they did in the mid-1990s.

Milanovic says the Chinese are hardly alone in celebrating better lives. The middle class in India, Thailand, Vietnam and other parts of Asia have also seen their bank accounts swell in the past three decades.

“Globalization is a good force, but you’re not going to sell globalization to your domestic population by telling them how good it is for China,” says Milanovic.

He can’t prove that trade and globalization caused Asia’s middle class to surge and the middle class in the U.S. to stall, but he says it’s a very “plausible story.”

THE APPEAL OF DONALD TRUMP

America’s lower middle class is frustrated, and many are gravitating to presidential candidate Donald Trump, who vows to fix “America’s disastrous trade policies” and bring jobs back from China and Mexico.

Over 65% of Trump supporters think free trade is raw deal, according to Pew Research.

More people are victors from globalization, even in the U.S., de Rugy argues, but that story is harder to tell. 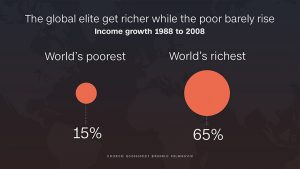 GLOBAL POVERTY IS DOWN

Global poverty is at its lowest level in history. For the first time, less than 10% of the planet is living in extreme poverty, currently defined as $1.90 a day or less, according to the World Bank. It’s a huge achievement and has been praised across the political spectrum.

“It’s little comfort to say to someone who last lost their job, ‘well, you should be really happy because people who are really poor are now much less poor,'” says Milanovic.

So while the majority of people in developing nations appear to be benefiting from globalization (the extreme poor, especially in Africa, are the exception), the results in the U.S. vary depending upon how rich or poor you are.

The more affluent (think incomes around $80,000 and above) have seen their incomes pop 30% to 60%, according to Milanovic’s research.

Meanwhile, the lower middle class and poor in the U.S. have barely gotten any benefit.