The markets have been changing recently, as problems with China have been having a significant impact on the global economy. All of this has led to concern, given that it will lead authorities to have to deal with difficult issues. The problem is that while the Federal Reserve can start to raise interest rates in the US, this is not anticipated to help the rest of the world’s economy.

At the same time, things have not been moving as quickly as was hoped in the eurozone, and the economy recovery has not been moving speedily. It was predicted that worldwide economy growth would be minimal in 2015, and while growth was expected in 2016, it was thought that many have worries that potential growth will not be as great as was originally hoped. As a result, the OECD predicted growth dropped from 3.8% to 3.6% for 2016.

According to the OECD report published last month, global trade, which goes hand in hand with global growth, has stagnated and even declined since 2014. This is due to the financial recession and weaker outlook for their exports in such economies like Brazil and Russia. Trade decline in China and its transition from infrastructure investment and manufacturing towards consumption and services is an important reason for the decline in commodity prices. However, there is a revival of both world trade and GDP growth, thanks to policy actions and a range of stimulus measures, including expansion of infrastructure investment.

As such, global growth has eased to around 3%, which is well below its long-run average. Although growth in OECD economies has held up this year, at around 2%, business investment remains subdued. There will be strengthening of global growth over the course of 2016-17, against a background of subdued inflationary pressures that will remain weak in the major OECD economies and in China.

None of this looks particularly promising, but reporting for Wells Fargo Investment Institute (2015), Tracie McMillon and Chris Haverland have other predictions for the upcoming year. The first of these is somewhat more positive than that of the OECD, as they report that:

The global economy may grow at a slightly faster pace in 2016. We expect developed market growth to rise next year, while growth in the emerging markets holds steady at the 2015 rate of interest.

You can watch the videohere

Meanwhile, their view is that there will be volatility in the bond markets while the Federal Reserve increases its funds rate. It is expected that there will be some instability in the markets as a result of issues like geopolitical risks. However, these advisors suggest that investors avoid concerning themselves too much about daily instability, and instead, focus on risk-adjusted exposures to their investments in the areas of equities, bonds, real assets and hedge funds, among others. 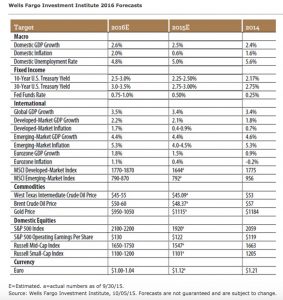 The view of the Wells Fargo Investment Institute is that global growth will be 3.5%, slightly lower than the OECD forecast, but nonetheless an increase on the situation in 2015, which was reported to be 3.4%. In the United Kingdom and the United States, growth of 2.6% is expected. Like the OECD, Wells Fargo predicts that China may continue to face problems, and it is expected that the growth rate for this economy will lose steam. This is as a result of the country moving from an industrial economy to one that is more consumer-focused. In addition to this, it was predicted that inflation could rise during the upcoming year, but that it would be likely to stay, in developed countries at least, lower than 2%. This is a level that is considered to be under control in the developing world.

Overall, it is reported that international earnings are expected to grow between 8% and 12% in the upcoming year. It is also expected that some stabilisation could occur in the emerging markets. However, this is not expected to necessarily lead to great gains for the equity markets. In developed markets, however, Wells Fargo has predicted that the bull market will continue for stocks throughout 2016, and in fact, that the Standard & Poor’s Index could achieve its biggest high ever throughout the year. However, the bond markets could face some instability depending on the direction in which global monetary policy goes.

Wells Fargo believe that the upward strength of the dollar in comparison to other currencies in 2015 is likely to continue in 2016, to some degree. This is because the US dollar is currently benefitting from decent economic growth. Changes in currency rates are predicted to have potential consequences for commodity prices in 2016, however, and these are predicted to be volatile. Oil prices may also move around a bit throughout the year, it is thought.

The Conference Board projections for 2016 are optimistic for investors, thanks to high liquidity and low interest rates. The global economy growth rate will raise from 2.5% in 2015, reaching 2.8% in total for 2016, with variations in geographic locations.

Below is the video representing Bart van Ark, Ph.D., executive VP, chief economist and chief strategy officer on How recovery will continue in 2016.

Investors should continue to be mindful of the risks that are involved in investing. After all, investing is always a risky activity. However, for investors who can see past the immediate problems and not get anxious, there are opportunities to achieve a degree of growth, especially given the low rate of inflation and the ongoing bull market for equities in the United States.